The Globe – a world of music 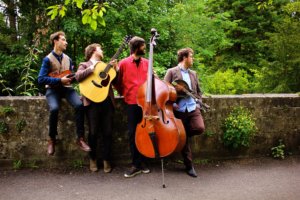 The Globe has always hosted a diverse range of music and we are emphasizing this in the livestream sessions. This is primarily a jazz website but you might be interested in the following acts.

The Often Herd, Friday 17 July
The Often Herd reach beyond what is expected of a bluegrass band, marrying the wistful sunshine harmonies of Southern California with the striking industrial allure of their home in the North East of England. An engaging and dynamic live act, the band are able to pull off their intricately arranged material alongside moments of exciting, spontaneous improvisation.
Rupert Hughes (guitar) and Evan Davies (mandolin) are responsible for penning the band’s vibrant and catchy original music. American fiddler Niles Krieger and jazz bassist Sam Quintana contribute deft and dynamic instrumental skills that lift the songs to new heights.
To view the livestream please make a donation via the following link https://bit.ly/2VwgfZn

Simon Todd and Phil Caffrey, Friday 14 August
Simon Todd is a founder member of Northumberland favourites, Morgan le Fay, Todd is an accomplished singer-songwriter, having rubbed shoulders with the likes of Chris Difford and Karine Polwart. His latest album, ‘Half Empty / Half Full’ was produced by Boo Hewerdine. Strong melodies, a big voice and quite possibly some dodgy banter
Phil Caffrey has been writing and singing songs for almost all of his life, but surprisingly, when he agreed to be the special guest on the opening leg of Dave Fenley & Simon Todd’s 2012 UK tour “Beer, Blokes & Ballads”, it was to be the first time he had performed as a solo acoustic singer-songwriter. Revered in the North East for live performances with “The Caffreys”, who reached the final of BBC TV’s ‘UK’s Best Part-Time band’, Phil now dedicates much of his time to teaching and coaching aspiring young musicians; passing on his skills to the next generation, and giving them a platform on which to develop and perform.
To view the livestream please make a donation via the following link https://bit.ly/3ibIdTO

AXLS, Saturday 15 August
AXLS are an electronic trio formed in 2018 in Newcastle Upon Tyne. Their synth-led sound features dreamy female vocals and low-slung bass.
Their debut album – ‘First Contact’ – is an electronic concept album which explores the story of Earth’s first encounter with an extra-terrestrial race. The newcomers enslave humanity with their addictive, immersive virtual reality. Only Alias, a young girl, has the power to resist and lead the fight back. Each song represents a chapter of the story.
To view the livestream please make a donation via the following link https://bit.ly/2YLEt3S