[OK, it’s not jazz, but anyone who is compared to Victoria Wood and Tim Minchin is worth checking out. It’s another example of how The Globe is broadening the range of its subversive musical offerings.] 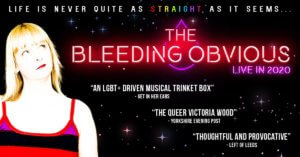 What happens when you tumble out of the big pink closet and across the LGBTQ+ spectrum in a sprawling heap? Well, life is never quite as straight as it seems…

One-woman cabaret The Bleeding Obvious (aka Yorkshire lesbian Jessica Rowbottom) endeavours to describe the experience through original songs and tales which are sometimes funny, occasionally poignant, frequently emotional, usually queer – and it’s probably the only show with the lyrics “demisexual panromantic polyamorous androgyne”!

With spoken-word support from AJ McKenna.

“An LGBT+ driven musical trinket box” – Get In Her Ears

“An exploration into musical and lyrical diversity” – The Queerness

Tickets £6 on the door or in advance from Ticket Source