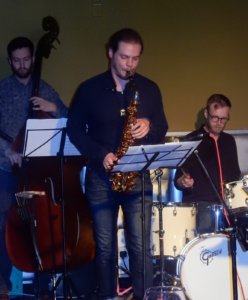 The Eagles eventually landed – a flat tyre en route delayed their arrival. However, another bird, Wylam Breweries’ Red Kite kept our Spirits high until at last the band was up and flying.

As you will gather from my recent review of their new CD it’s a very impressive album indeed and all the plaudits posted then apply now. However, there is a difference. Even if you have the best Bose sound system in the world, it pales against hearing the participants live – even after a seven hour, incident-packed drive!

Eagles, the younger, composed all 8 pieces and had the lion’s share of the solos. A full-toned, angular player, he soared effortlessly through the changes. Well, he would do, wouldn’t he? He wrote them himself! Big brother Duncan had fewer solos but when he did, he seized the moment. Perhaps a more contemporary player than Samuel (the jury’s out on that one) he also contributed to the rich ensembles. Sometimes in unison, more often in harmony and frequently in a contrapuntal almost fugue-like fashion. This was no mere ‘blowing band’.

Wyld is rapidly becoming one of the UK’s leading vibes players and neither he nor pianist Leak got in each other’s way. Luthert and Hamblett were solid at the back with Hamblett having several chances to shine. He shone.

Luthert set his stall out in the introduction to the enigmatically titled Changed, Changing Still. An engine room operative first class.

Great solos from all, but the cream in the coffee is the compositions and the arrangements. Beautifully set out with the tension building almost imperceptibly until suddenly, the clouds are beneath you.

Difficult to pick out any one piece but my own favourite was Hope in the Hills. I felt this had a highland feel to it and imagined it was inspired by a gig in Scotland. Imagine my surprise when Samuel told us it was about a gig in Italy! It didn’t detract my enjoyment of the music.

A gig, like the CD, to remember and reflect upon.