Ruth Lambert and the One Trio 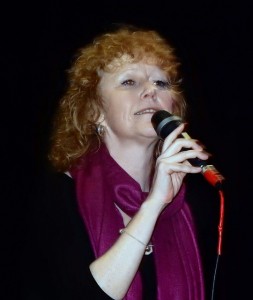 This was a top drawer performance which would be worthy of an appearance at any festival, so we were very privileged to have the band at the Globe. Ruth sang numbers from the Gasbook expressively, every single word was clear, her voice was a delight to hear, and in fact her singing was a masterclass for all aspiring singers. The instrumentalists played so well and looked as if they were enjoying themselves immensely.

The chat was amusing too, concerning curly hair, which is sported by both Ruth and Alan, and brief discussions about which numbers they were doing, literally, eg You’d Be So Nice To Come Home To appears to be number 122 in the pad.

It all began with Paul’s bass riffing atmospherically for the opening of No Moon At All and concluded with the band having a general jamboree on Caravan. In between came numbers such as Dindi (the verse sung freely with the piano, and a real smooth bossa feel, very different from swing); You Don’t Know What Love Is (feelingly sung with skilled brushwork on the drums, round and round on the snare); Blue Skies (fast version with Ruth playing with the words, better than simply scatting); Love For Sale, (including the cynical verse, a difficult song well acted out by our singer).

Alan’s solo on You’d Be So Nice To Come Home To drew cries of delight from the audience, and in fact all his solo playing was superb, as were those from the bass and drums. The rest of the songs performed were: Save Your Love For Me; There’ll Never Be Another You; Just Friends; Black Coffee; Taking A Chance On love; But Beautiful; Devil May Care; Makin’ Whoopee; Round Midnight.

At the end of the performance, (unfortunately it had to end), I was struck be the realisation that I would have enjoyed the gig even if I hadn’t liked jazz at all, the music was so good by any standards.

You can’t say fairer than that.