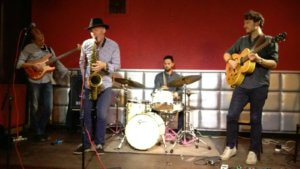 Normally, this isn’t the sort of gig I would attend; my preferred option being for a more improvised, freer, kind of jazz. Fortunately, I decided to put my music prejudices aside, took a punt and made my way to The Globe on Sunday night. I was more than rewarded for my gay abandon as this splendid international quartet delivered a highly enjoyable and thoroughly entertaining performance.

For the first set, the band featured their latest album Transitions. As the title suggests, this consisted of one uninterrupted piece with each tune segueing seamlessly into the next. The second set consisted of several tunes including a song named after a cheese although this was not of the blues variety but rather the Greek (Halloumi).

Costello is an affable character strutting about the stage like a string puppet and at one point even performing a bit of mime. Equally proficient on both tenor and soprano his compositions are very melodic yet still always interesting.

A lot of the music had a folksy, European, worldly twist to it but, given the multinational flavour of the band, this is unsurprising. An Englishman, a Pole an Italian and a Canadian walk into a jazz bar the Barman asks ‘what’s it going to be?’ they order Gin, Vodka, Grappa and Canadian Club respectively the Barman then asks ‘how would you like them?’ the band reply in unison Straight no Chaser.

Italian bassist Tacchi’s playing was absolutely superb and I particularly enjoyed his quiet, subtle, solos. Polish guitarist Pysz was fantastic every single solo of his was a joy. Keeping it all together was the unflashy but very classy Canadian drummer Teixeira. It was clearly evident that the ensemble’s great enjoyment of playing together was mutual and their enthusiasm certainly spilled over to the very appreciative audience. A really top quality evening and I thoroughly recommend everyone to catch this band wherever and whenever they can.

David Lyttle Trio Christmas presents and gifts for all occasions