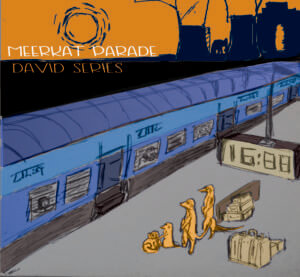 Meerkat Parade consists of four like-minded musicians who all have a love for creating new and exciting music.

James Lindsay (also a composer and band leader with his recent debut album the Strand CD) plays acoustic bass. James was the winner of the 2014 Martyn Bennett Prize for Composition and tours with bands such as Braebach and Ross Ainslie amongst many others, having recently recorded Ross Ainslie’s latest album Sanctuary.

Max Popp on drums has recently moved to Scotland from Chicago. Bringing with him all his experience from playing in the USA it has not taken him long to become active in the Scottish music scene, amongst others having recently performed on the BBC with Fraser Urquhart( up and coming Jazz musician of the year) and his trio. His energy and drive can be heard throughout the album.

Huw Rees plays Hammond Organ, Fender Rhodes and piano on the record. He won the Dave Holland prize for composition whilst studying at Birmingham Conservatoire. His unique modern and compositional approach to improvising can be heard in his playing.

David Series has played with numerous bands and musicians around Scotland and further afield including trio HSK, trio RSP and Tom Gibbs. This band is his first project and recording as a band leader and consists of some recent compositions as well as some that have evolved over a few years.

“the whole CD sounds as if it has stories to tell. The quartet tell them well” London Jazz News

Tickets £10 (£7 students)
Available online and on the door