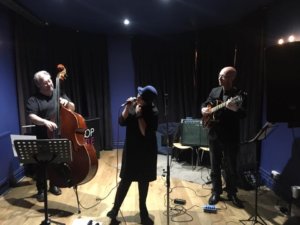 This is my Gig Of The Year, no question about that. It was a brilliant performance by Julija, who also brought out the best from the musicians, who are among the best anyway. I’d seen this lady give great performances at the Jazz Cafe Tuesday jams, dramatic, soulful renditions of songs with which she wowed the audience, but tonight the full force of a totally engaging personality was revealed. Not only did she give wonderfully inventive versions of the songs, but she had the audience joining her in a couple of choruses, she mentioned many audience members by name, she told us all that she was grateful to be performing for us, and she added humour to some song interpretations, even causing Paul to be somewhat embarrassed in a fun way. I’ve rarely seen such effective musical chemistry as there was between Steve on guitar and Julija’s vocals. I feel sorry for people who weren’t present last night, especially women singers, who could learn loads from watching the performance.

The trio was even colour coordinated, all in black except for Julija’s blue hat. The songs included:
Masquerade; a voice with some similar tones to Billie Holiday, and with a big range and every word crystal clear, lots of playing with the words and scatting which fitted well, not just there for its own sake.
Angel Eyes; Very soulful, with Julija’s left hand moving as if playing an invisible sax. (She actually plays piano, don’t know about sax).
Aqua Bebe; In Portuguese (I think), she beats out the rhythm on the side of the bass, Paul embarrassed but pleased, the audience joins in the chorus.
Lia (this means rain in Lithuanian and I should have checked the spelling), her own song, all about the rain in her homeland.
Storm; an original with lyrics written by a friend of the singer.
Mood 3; an original in English, a love song, with whispered scat.
And I forgot to mention that Paul and Steve had loads of space for long solos in many songs, which they fulfilled well.
Second Set
One Note Samba and Cry Me A River; the latter is like Summertime, sung too often, but our singer managed to make it sound fresh.
All Of Me; such fun, Julija pointing to Paul for the low bits and to Steve for the high, such humour and a bit of embarrassment.
There’ll Never Be Another You; slow and sweet, then fast, then morphing back into the previous song, to the surprise of the musicians I suspect, but they could cope!
Mood Indigo; very slow, she gets down, almost kneeling, very expressive, but didn’t take herself too seriously.
I left the room for what the Americans call a comfort break and returned to find the audience singing along with something that seemed to be Lithuanian.
What A Wonderful World; the ‘straightest’ performance of the gig, sung sincerely, and she told us about childhood memories of the song, which turned her on to jazz singing.

The audience then demanded an encore which I missed as the Metro was calling me home.
If you weren’t there, you’ve missed a Gig Of The Year. Need I say more?