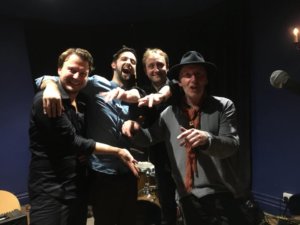 I didn’t know what to expect, as the sax player and guitarist had taken an excellent workshop at the Sage in the afternoon, mostly based on Miles Davis’s Flamenco Sketches, with us doing melodies based on modes, heady stuff. What we got in the evening is what I’d describe as ‘International Jazz’.

Tunes with influences from Poland, the East, martial drum beats, J S Bach-like guitar melodies, and titles such as Panettone, Walking Through The Jungle, Halloumi (Julian is addicted to this, or so he said).This was all thoroughly enjoyable, played to an appreciative audience, and I can’t wait for the band’s next visit.

The first set consisted of one long composite tune(s) and a shorter number – Walking Through The Jungle. It all began with a blast on the tenor, ambient sounds from the others, mallets on drums, electronics from the 7 small different coloured boxes lying beside the guitar, then a tune arose from the sound, a Latin beat, a groove, tenor solo, quick change to soprano, a drone from somewhere, then behold!, we were led in clapping the rhythm by the band. I’ve maybe made it all sound chaotic, but it all hung together beautifully. So readers will have gathered that this was no ‘play the head, solos all round, head again to finish’ job, but an interesting performance with quite a bit of humour as well, such as when the drummer blew up a balloon, Julian danced enthusiastically on the spot whilst playing, and Maciek and Julian had a mock fight, pretending to hit each other. There were many false endings to keep the audience guessing, such fun. The second tune sounded a bit more conventional, although it featured the drums especially, solos all round, and a rather sudden ending to contrast with the false endings that we were getting used to.

The second set comprised five tunes, and the first was a totally unspellable Polish tune, tenor led, drumsticks on cymbals, and the two guitars complementing each other, with hints of J S Bach. Indeed I think Bach would have enjoyed the whole gig. Panettone included martial drums, and Julian told us how another band member, who comes from Moscow, had complained about Putin. Putin had his revenge for that story as there was crackling on the guitar during the tune. Fruity was lively, boppy, with elements of rock music. Halloumi sounded Spanish, then became Eastern, as if the sax was charming snakes. The final tune, The Cost Of Living, was cooler, calmer, a tune far lovelier than the title would seem to indicate.

What a satisfying evening of Jazz!

Support us when you shop online Julija Jacenaite Trio