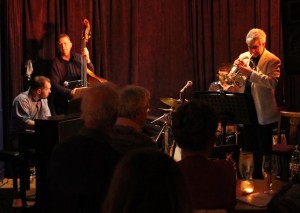 Turn of the year saw new tenants take over the running of the downstairs bar and with it a choice selection of real ales. Upstairs, the ale situation is improving… Incidentally, next time you’re at a jazz gig in the Globe, get there early and take in our man Ken Drew’s great photos of some of the previous gigs here.

Tonight, however, the emphasis was rather more on the ground floor grooves rather than the disciples in the upper room. Nevertheless, the room had the ambience required with no empty tables and, bang on time, the musicians were up and running. This was their first public gig, indeed, the Italian pianist confessed that this was the first gig he’d ever done with a non-Italian group.

It didn’t matter, having heard Falcioni sitting in at jams I knew he could cut it and the others were no mere passengers.

The set list was varied: Recorda Me (Joe Henderson); Beautiful Love (Johnson on flugel); Blue on Green (Johnson tightly muted); Ma Cerise – a tune composed by Falcioni and dedicated to someone special who was also in the room. Why didn’t everyone go Aaah? Another original, Blue Marine, then a couple of Herbert’s [Hancock] – Dolphin Dance and The Maze.

It was a good set: Johnson full-toned, Parker animated, Bates, becoming a contender and Falcioni no longer just a guy who drops in at jam sessions.

Interval time and, downstairs, The Palominos were taking Buddy Holly’s That’ll Be The Day for a gallop which was when I decided that I’d reluctantly forego FF’s second set.

Not Now Charlie Archipelago at Koan 1