Presented by Jazz North East and Jazz.Coop at the Globe in association with Tyneside Irish Festival 2018. 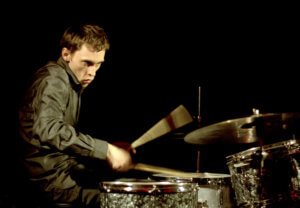 One of Ireland’s most celebrated jazz musicians, MOBO Award and Urban Music Award nominated drummer/composer David Lyttle has performed in over 20 countries, including recent high-profile artist residencies in China and the US. Growing up in a prominent musical family in Co Armagh, David has gone on to collaborate with global icons of jazz and hip hop, from Joe Lovano and Jason Rebello to Talib Kweli and Soweto Kinch.

“…the best in jazz coming out of Ireland today.”
– THE INDEPENDENT

“…infectious…hypnotic, soulful and terrifically rhythmic. One of the most inventive Irish releases of the year.”
– HOT PRESS (on Faces)

“…ambitious in its distillation of folk and urban, acoustic and electric, pop, jazz and rap sources…huge variety in sound and tone…Lyttle achieves musical coherence all the same…an impressive achievement…”
– JAZZWISE (on Faces)