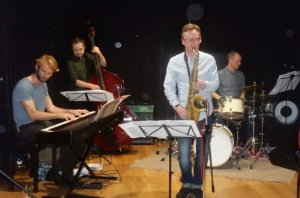 I’d recently reviewed the band’s current CD, Colour and Movement, and been impressed – it’s a stunner. However, hearing the band live in Newcastle really brought the CD to life and I appreciated it all the more. It’s a chicken and egg situation – hear the band live to appreciate the CD or hear the CD first to appreciate the band. It’s a win win situation and the Jazz Coop audience certainly felt they’d backed a winner last night at The Globe.

The music is tantalising with lots of mood swings from dreamy meandering to powerful in your face contemporary and beyond, often in the same number. Much more than your average ‘original’ composition. Well thought out, but not contrived. Jazz without compromise incorporating the leader’s Scottish roots, a touch of Brazil and a measure or two of Rajasthani folk music. This latter strain came from the band’s trips to India. They pay a third visit in June, but not before a gig in Eyemouth on April 29.

Molley, who composed and arranged most of the material, has set himself an uphill task – how do I follow that?

I’m sure he will and, if not, well, there’s always room for a tenorman who can blow Autumn in New York (not on the album) like he did – Stan Getz Lives!

On piano, Tom Gibbs did the business. His amazingly long fingers spanning intervals that only an octopus could match. Mario Caribe didn’t make the trip but James Lindsay did – a supersub if ever there was one. And Stu Brown! This man turns up in many guises! Raymond Scott, Looney Tunes and, Paul Bream tells me, he is also part of an improvising trio with Graeme Wilson and Andy Champion.

Not that it really matters to the listener. The music spoke for itself.

This was a gig to remember! and Wylam’s Collingwood Ale (unfortunately only available frae the ground floor bar) superb.