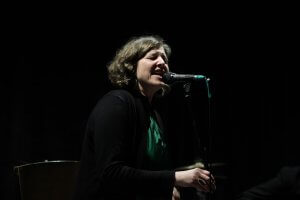 A drink was spilt over my notes and then my birthday intervened to prevent this review being done as quickly as it should, but no matter, this Jazz Coop presentation may well qualify as my Gig of the Year, yes, it was just sooo good. Gabi had done loads of research for this. You’ve heard of illustrated lectures, well this was an illustrated gig. Gabi presented the thesis that Billie Holiday and Kurt Weill could possibly have met sometime during 1934-1950 in New York, maybe at the Cafe Society, which was the first integrated club. Just imagine, Weill, a middle class, Jewish immigrant, a socialist, twice married to his singer Lotte Lenya, and Billie, black, born to a teenage mother, raised in care, with addiction problems, and both of them immensely talented. 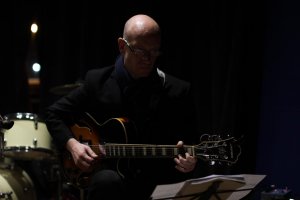 Anyway, their various songs were presented to us with great understanding and feeling, and Gabi managed to make Billie’s songs her own, no mean feat. And Steve’s playing was so good that it defies description, heartfelt, skilled, always matching Gabi’s interpretations. Good Morning Heartache, a spirited version rather than being utterly depressed, which maybe portrayed Billie’s addiction issues; I’m A Stranger Here Myself (immigration and stranger to love); a song called, I think, Crazy In Love; Weill’s song Here I Stay, with scatting as it should be, keeping close to the guitar chords. Lover Man followed, and Tell Me More and Then Some, with shaking percussion and a long effective solo from Steve. The first set was rounded off with a clever medley of songs about boats and boat travelling immigrants.

The second set opened with travel songs, I’m Travellin’ Light and Weill’s Show Me The Way To The Next Whisky Bar (great fun), then a heartfelt Don’t Explain; All Of Me; and a beautiful slow, sad, September Song. Strange Fruit, the song I liked best, had edgy chords on a small zither and on the guitar, ending with Steve playing a single chord with fingers up and down the guitar. (Sorry about the lack of technical explanation). Weill’s Speak Low was followed by a well-earned encore of God Bless the Child, which Gabi somehow made her own.

I’d looked forward to this gig and I certainly wasn’t disappointed.