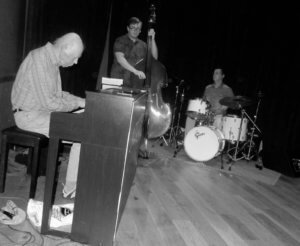 An Alan Glen gig at The Globe is unlike any other gig. It’s as if you’re sitting in Alan’s front room whilst he plays for you, his friends – on this occasion around about 20.

It brings to mind the legendary Oscar Peterson albums that were subtitled exclusively for my friends and that’s how it felt tonight. I’d have felt privileged to have been at those Peterson sessions but, I felt even more privileged tonight! I’ve got the Oscar sessions on disc but the Alan Glen ones are only in my head. It doesn’t matter, I’ll relive the highlights without having to crank up the old Victrola. That’s how good they were.

If I brush over Alan’s playing it’s because I’ve simply ran out of superlatives. He is THE MAN! Nothing left to say – simply the best.

In John Pope he’s found a bass player that travels well. He can run the changes, but, unlike so many, retains the melodic aspect, as well as displaying a sense of humour and listening to what’s happening – he had an outstanding night.

Sid, he decided there were too many Pauls and not enough Sids on the jazz scene and so opted for his middle name, played a blinder. His brushes solo on The Way You Look Tonight pure magic indicating a drum solo doesn’t have to be all crash bang wallop although our boy can do that with aplomb.

I’d have loved to have been at Gosforth for the evening’s other big gig but some things you have to savour and treasure while you can – I mean, John Pope won’t be around forever…

Four; How Deep is the Ocean?; I Fall in Love too Easily; Ticket to Ride; All Blues; The Way You Look Tonight; Solar; A Weaver of Dreams; Love is a Many Splendored Thing; That’s All; All of you; Rollin’ Sid; Something Borrowed, Something Blue; Blue Monk.

Every number deserved an in depth description but the music really spoke for itself As is his wont, Alan is a man of few words although tonight, as the first set ended, Alan apologised for finishing one tune short. ‘The fix has worn off’, he said, to which Sid quipped, ‘He’s ran out of Sanatogen’!