A sense of deja vu here. Having spent some time listening and reviewing the trio’s most recent album – Little Mysteries – and renewing acquaintance with their debut album, Traveller’s Tales, the sound of surprise wasn’t quite there. And yet it was!

The albums had been recorded under perfect studio conditions but, to these ears, the live sound at the Jazz Coop HQ was even better! (It isn’t always the case here!) and the almost classical edge to Benzie’s playing and compositions was crystal clear. 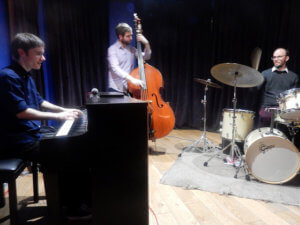 Each piece had its own identity and the youthful looking pianist went to great length (some said to too great a length) to explain the inspiration behind each opus. Musically, I felt there were suggestions of Debussy and, more often, Bill Evans. Neither of which was a bad thing. There was also a glance towards Duke Ellington with the harmonically rich Midnight Café. All but two of the pieces were by Benzie with bassist Robb contributing the other two.

What the CDs didn’t quite capture was the prodigious technique of drummer Juhasz. Whether working out with sticks, brushes or just hands he left the listeners awestruck.
When the last note had sounded the audience demanded and, of course, got the encore they were shouting for I groaned. Even though encores are optimistically built into the performer’s setlist I personally can take them or leave them. Just as I rarely ask for second helpings of dessert (unless it’s apple crumble) I can live without the encore.

However, tonight’s encore definitely fell into the apple crumble area and some might argue it was the best number of the night – Frog Town on the Hill from their earlier album. Possibly because this was the last gig of a two and a half week tour that took them across Europe and the UK they didn’t play the concise version, in fact, I almost missed the Metro!
I didn’t, but I wouldn’t have minded if I had!

The toughest job in jazz? How we handle your data